My favorite word is “epiphany.” I’m not sure I can even articulate why I love this word so much – its quirkiness? its vitality? its hope? I remember my youngest son asking me about this. At the time, he was about 7, and his favorite was “puny,” because “it just sounds funny.” Which it does. Doesn’t it?

And then he says, “I was epiphanied once.”

I’ve been epiphanied more than once, and often when I’m not expecting it. In the early stages of our grief, there were very few things that made sense. We wrestled with faith, truth and homework. My sons and I had lots of questions and fewer answers. We used a lot of little words. Many four letter ones. Like puny.

And several completely unlike puny.

And every now and again, we found a little light. Just enough to make our way through the darkness. The following is a rant from 2007, just for a little perspective. 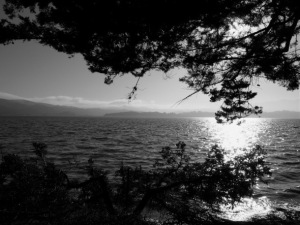 My friend describes my faith as having been “challenged.” This is her nice way of saying that I have told God to take Her own flying leap about a dozen times in the last two months. But my friend is too nice to tell her friend what I have said.  Her friend recently lost his wife to cancer.  He has faith, and his faith is getting him through.  [This friend of a friend, by the way, is now my wonderful husband.]

I feel abandoned by God, and clearly God abandoned Sam.  And my sons.  This is part of God’s plan?  To push a loving, devoted father and husband off a building?  To deprive my boys of their favorite baseball coach?  I really don’t need this kind of plan.  Or this kind of God.  I already had enough character.  And that whole load of crap that God doesn’t give you more than you can handle is… well… a load of crap.

My friend (with faith) gave me a book of 365 quotes.  Some of them are truly inspirational, and some are like tomorrow’s: “God can take tragedy and turn it into triumph.  He routinely does this for those who love Him.”  For those who love Him?  What about those of us who are enraged by Him?  Now THAT would be a God I could respect. But this God who conditions His care upon my love for Him first?  This is why I have a dog.

Another friend called today.  She is also religious, but not one of those namby pamby, airy-fairy, God-is-Love type faithful girls.  She’s a thinker, and her faith has been challenged. She doesn’t use the words, “God’s plan.” She doesn’t feed me a line about my being God’s perfect child, or worse, about God being perfect. She talks in terms of completeness, which I get, because completeness includes the good, the bad and the horrifying.  She doesn’t talk long term, she talks today, which is about what I can handle.  Most days.

Last night my son threw a major fit because I wouldn’t let him watch TV before completing his homework.  Why he flew into a rage about this, I’m not entirely sure because the family rule is pretty much Homework first, then TV.

But as I step back and think for minute, I realize I know exactly why he’s mad, but it’s not about the homework – he is hurt and furious because his dad jumped to his death, leaving my son without a loving father, without faith in the strongest man he knew, without a catcher to pitch to, without his personal morning alarm clock.

So I let him rage.  He hit and kicked; he shredded the geometry homework he had worked on for three days; he destroyed the plastic fireman’s hat his brother got from the local fire station the day before; he turned the hose on me; he tried to hurt himself – walked without his crutches, stopped short of pulling the stitches out of his own foot.  I stayed with him as best I could, protecting him, his brother and me, recognizing and understanding his anger, but also terrified of it.  When I called the family therapist in a panic, my son followed me around the house, first like a crazed stalker and eventually like a puppy dog.  By the end of the 30-minute telephone conversation, this boy wrapped his arms around me in a hug.  By the end of the evening, both boys were fed, bathed and books were read.  The homework was even completed; I had called a friend and asked her to read all the geometry vocabulary from her son’s homework; then my boy looked up all the definitions again.  He dictated and I typed.  And it was done.  Finally, I sent an email to his teacher explaining that my son had to do the entire page of geometry definitions all over again because the puppy had shredded the page.  That’s my story and I’m sticking to it.  Another reason to have a dog.

But I don’t need a God who is less compassionate than I am.

Now a God who will let me rant and rage…. And still love me.  That is a God I could respect.  Not the one who needs me to love Her first.  But One who understands when I hit, kick, swear and drink.  Could there be such a God?  I just might adore Her.

Wishing you light and strength for today. And one little epiphany.